Inspired by the Fraternity That Shaped Him 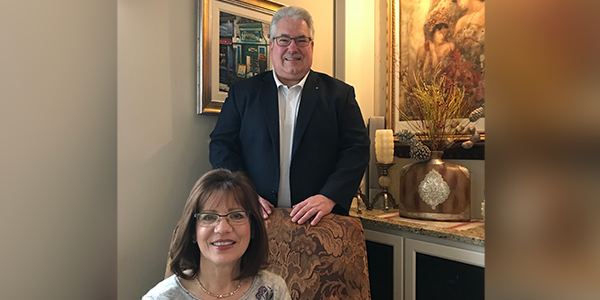 When it was time for Harold and Monica Snyder to put pen to paper and decide how they wanted to distribute their assets when they were gone, their decision was easy. They decided to make a generous legacy gift to support the Masonic Villages and Masonic Children's Home.

"We've always been strong proponents of charity," Harold said. "When we had to decide which charity, the organizations and fraternity have meant so much to our family, it was a no brainer for us. It was the first thing we both said, frankly."

Growing up, Harold was surrounded by people for whom he has great respect. As he grew older, he soon realized that nearly all of them – from uncles to neighbors to his mother and father – had two things in common: Freemasonry and the Order of the Eastern Star.

"Nearly every good thing that I've encountered in my adult life had some relationship to Freemasonry," Harold said.

In 2016, Harold lost his parents, both of whom were members of Freemasonry and Order of the Eastern Star. "My parents were more than a foundation for the person I am, but also a constant reminder that living by a solid world view and being open to new experiences and people, allows for a lifetime of growth and fulfillment. Freemasonry has reinforced these tenets for me, as well."

For work, Harold frequently travels a route from Illinois to Maine. It had been nearly 23 years since he had visited the Masonic Village at Elizabethtown, which is also home to the Masonic Children's Home. A few years ago, during one of his work trips, he stopped on the campus to see how things had changed.

"I was absolutely amazed at the progression that had taken place and the amenities and the way the facility looked and operated," he said. "I stopped to chat with a couple of people, and they were all just wonderful. If I was 99% sure we made the right decision, after I visited, I was 110% sure."

Later on, Harold and Monica were driving through the area for a visit, and Monica wanted to see the campus.

"We walked around, and she said the same thing, 'This is the right decision for us,'" Harold said. "Investing in Masonic Village and the children's home, which further supports our world view, is our honor, and we are truly blessed to help in this small way."